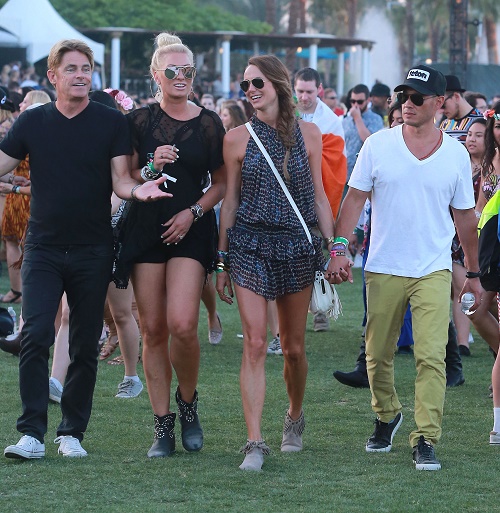 George Clooney’s ex Stacy Keibler is not taking his marriage to Amal Alamuddin well, or the couple’s rumored pregnancy. While the world was celebrating Amal Alamuddin’s baby bump, Keibler went to Coachella to party hard and drink her sorrows away. Although Stacy has since moved on from George and had a baby of her own, insiders say she is still upset that her relationship with George didn’t work out – she really thought that she was going to be the one wearing his wedding ring right now.

The May 5 edition of Star Magazine reveals that attendees at Coachella spotted Stacy Keibler at a bar – and she could barely stand up on her own two feet. According to the tabloid’s insiders, “Stacy was at the bar trying to buy a beer but she could barely stand. Her make-up was all over the place and she was screaming and being obnoxious. Everyone was staring and pointing at her – it seemed like she had no clue where she was.” Well, that’s embarrassing.

George Clooney and Stacy Keibler defied all odds and shocked everyone by managing to stay together for a whopping two years. In 2013, after several breakups and makeups, the hard-partying couple finally went their separate ways and in less than a year George was dating his now wife Amal Alamuddin. We can’t even say we blame Stacy Keibler for being upset about George and Amal’s wedding and pregnancy – after all, she dated George for two years and has nothing to show for it. George dated Amal for three months and then put a ring on her finger.

Stacy Keibler has always been known to party a little too hard – but her Coachella display is a new low for her. Do you blame Stacy for being upset over George and Amal? Or do you think that it is time for her to move on and worry about her own husband and baby? Let us know what you think in the comments below!