Gwen Stefani and Miranda Lambert Showdown: Did Blake Shelton Cheat on Miranda With Gwen Before Divorce? 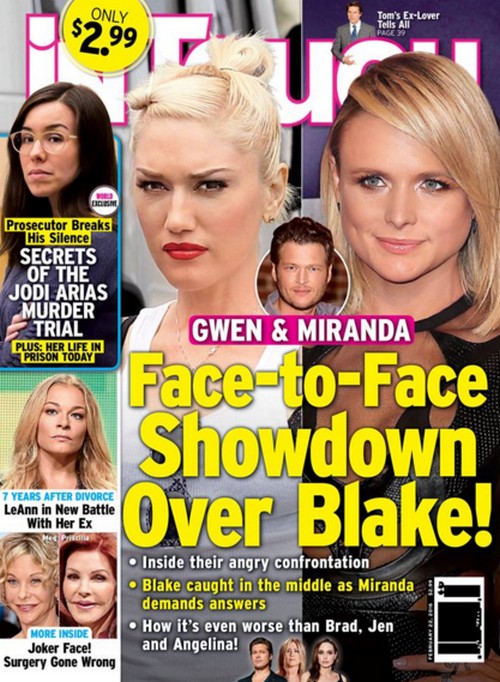 Gwen Stefani and Miranda Lambert are NOT friends – and considering the fact that Gwen Stefani was hooking up with Miranda’s ex-husband Blake Shelton before the ink was nearly dry on their divorce papers, it is probably safe to assume they won’t be having slumber parties and painting each other’s nails any time soon.

This week’s edition of In Touch Magazine features a photo of Gwen Stefani and Miranda Lambert (both women appearing equally vicious), and the headline screams “Face-To-Face Showdown Over Blake!” It sounds like the two divas had words with each other! The cover goes on to tease, “Inside their angry confrontation, and Blake caught in the middle as Miranda demands answers.”

So, why is Miranda so upset with Blake Shelton and Gwen Stefani? Miranda, like the rest of us, is pretty confident that Blake was cheating on her and hooking up with Gwen while they were still married. You have to admit – it is kind of odd that the two “Voice’ stars got divorced at almost exactly the same time, and basically began dating over night.

It’s no wonder Miranda is upset, it sounds like she got bamboozled – and regardless of whether she and Blake are divorced, he does owe her some explanations.

This is where it gets even juicier though, In Touch actually reported a few months ago that Blake and Miranda were still very much in contact – and Gwen Stefani was a hot mess over text messages that she found between the former married couple. Is Blake playing both women, and trying to have his cake and eat it too?

In other celebrity gossip news, if you have been following the Jodi Arias murder case – you can get a sneak peek at her life inside prison in this week’s edition of In Touch. Call us crazy, but we have a sneaking suspicion that she hasn’t exactly living the lavish prison life like some of our favorite Orange Is The New Black gals.

Oh, and according to the tabloid’s cover – LeAnn Rimes is once again caught up in another legal battle with her ex Dean Sheremet. Apparently he’s still a little bitter about the whole ‘cheating with Eddie Cibrian’ thing and intends to expose ugly secrets in a tell-all book! Can LeAnn Rimes’ reputation get any worse?

So, are you Team Miranda or Team Gwen? Does Blake owe Miranda an explanation, or is it none of her business now that they are divorced? Do you think Blake and Gwen were hooking up when they were still married? Share your thoughts and theories in the comments below!