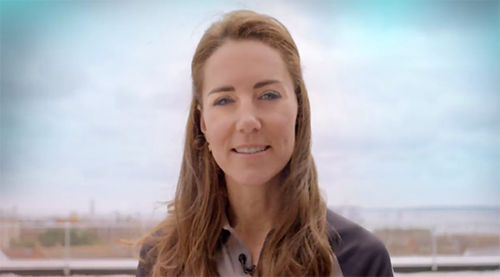 Kate Middleton is being criticized once again for not being able to do a job right. This time around, many critics are blasting the Duchess of Cambridge for apparently not sounding ‘posh’ enough while mispronouncing one of the most important words in the English language.

Kate Middleton and Prince William are not traveling to Brazil to support Great Britain’s Olympic team due to fears stemming from the widespread Zika virus in South America right now. While a

Kate Middleton pregnancy has not been confirmed by Buckingham Palace, the Duke and Duchess of Cambridge are apparently playing it safe just in case they do end up getting pregnant in the next several weeks. So that’s why Kate Middleton and Prince William, along with Prince Harry, shared their support for their Olympic athletes by releasing a video for Team Great Britain.

In the clip, Kate Middleton can be heard pronouncing ‘British’ as ‘Bret-is’ instead. She says, “London 2012 showcased the best of British sport. And we are so excited to see what can be achieved in Rio.”

While there’s no doubt that Kate Middleton’s pronunciation is being scrutinized by her critics, many know that public speaking is one of the Duchess’ weakest points. Kate Middleton can often be seen nervously stumbling over her words and looking uncomfortable whenever she is forced to make a speech or presentation in front of an audience. But considering this is a pre-recorded tape, Kate Middleton could have better prepared herself for the few lines she had in the video.

This, of course, will just be another reason for Queen Elizabeth to shake her head in embarrassment, as anything Kate Middleton does or says these days simply isn’t ‘posh’ enough for the British royal family. And if that weren’t enough, Kate Middleton and Prince William are scheduled to go on yet another vacation during the Rio Olympics, even though they’ve done very little actual work these past few weeks. While Prince Harry is scheduled to visit Malawi to do work with the 500 Elephants initiative, Kate Middleton and Prince William are proving once again that they simply don’t care.

Kate Middleton and Prince William’s absence at the 2016 Olympics in Rio de Janeiro is understandable, especially if the couple is planning another royal pregnancy, but they could have put a little more effort to support the British athletes who are competing this year.

Considering how many of the Duke and Duchess of Cambridge’s patronages are sports-related, they could have done more than a two-minute video with Kate Middleton’s complicated pronunciation of “British.” What do you think, CDL readers? Does Kate Middleton not sound ‘posh’ enough in the clip? Is she embarrassing the royal family again?

The Duke, Duchess and Prince Harry wish all the @TeamGB athletes good luck ahead of #Rio2016 #BringOnTheGreathttps://t.co/isxyHEv7mM