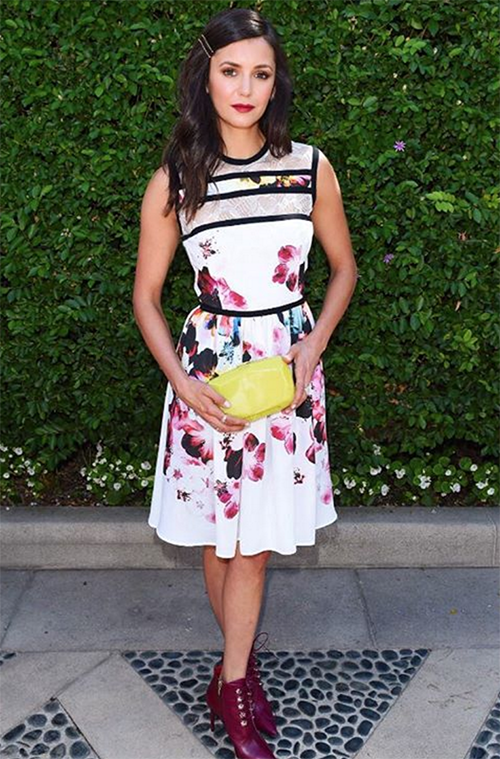 ‘The Vampire Diaries’ spoilers for season 8 keep coming. No one knows yet if Nina Dobrev is returning for the TVD series finale – speculation is Nina has refused to bring Elena Gilbert back to Mystic Falls. The latest buzz is that Kristen Stewart will show up in a guest starring role.

Working with a vampire theme is nothing new for Kristen after portraying Bella in the ‘Twilight’ trilogy. It might be difficult to pull off Kristen as a love interest for either Damon [Ian Somerhalder] or Stefan [Paul Wesley], but maybe Caroline [Candice King] would be interested in dipping her toes in the lady pond.

‘The Vampire Diaries’ spoilers for season 8 suggest that Elena body-jumped into whatever character TPTB will write for Kristen. That’s not a far-fetched TVD spoiler for the series finale. Mystic Falls is full of vampires, werewolves, witches, hybrids, doppelgangers and body-jumpers. Why not add one more to the town?

FX News Call reports that because Nina refuses to reprise her role as Elena producers want to bring in a big name star with lots of experience for ‘The Vampire Diaries’ series finale. Reportedly, Kristen is in negotiations with TVD creator and executive producer Julie Plec.

So much for emotional promises from Nina Dobrev to Julie Plec. Wouldn’t Ian Somerhalder be thrilled if Kristen Stewart was brought into fill the void left by Nina’s refusal to return for the series finale of TVD?

Ian Somerhalder has absolutely no desire to work with Nina Dobrev ever again. Previous reports suggest that Ian’s wife Nikki Reed is furious at even the thought of Ian and Nina filming love scene. Reportedly Nikki went so far as to threaten Ian with divorce if there were a Delena reunion for ‘The Vampire Diaries’ series finale.

Could the speculation about Kristen Stewart guest-starring on season 8 of TVD be true? Let us know what you think in the comments section below and keep checking CDL for all your celeb and TV news.

For #ThrowBackThursday I would like to honor the late Jake Bailey. He was an amazing photographer, a beautiful makeup artist and dear friend. He was an unbelievable talent and there isn’t a day that goes by that I don’t think of him. He will be remembered and celebrated forever through his beautiful work… which is showcased on a website made after Jake passed. He did both the makeup and photography for this photo above, to see more of his incredible accomplishments and photographs please visit his website. Link is in my bio or you can go to http://www.jakebailey.com #WeLoveYouJake #RIP #JakeBailey

Sundays Mornings are the shit when you’re a boss with a magical unicorn. #YouAreWhatYouDrink Wait a second…