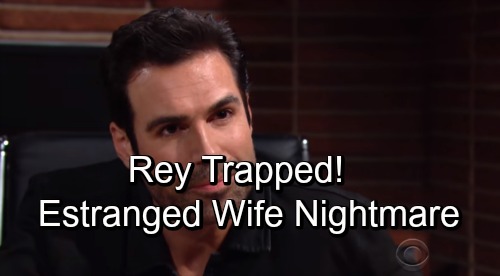 The Young and the Restless (Y&R) spoilers tease that Rey (Jordi Vilasuso) will fight an inner battle. He believes Sharon’s (Sharon Case) the weak link of the girls’ night gang, so he’s been trying to get close to her. They work together and even hang out as friends.

Of course, Rey is starting to think of Sharon as more than just a target or even a pal. He wanted Sharon to drop her guard, but now Rey’s the one who’s dropping his own. He can feel the walls coming down with Sharon, which could compromise his investigation a bit.

Plus, Nick (Joshua Morrow) will be a major problem for Rey in the coming weeks. As Sharon and Rey grow closer, Nick will do his best to drive a wedge between them. Rey will be equally determined to protect Sharon from additional pain.

Jordi Vilasuso weighed in on this tricky situation in an interview with Soap Opera Digest. He admitted that “Rey definitely has Sharon’s back because she’s the victim here.” Vilasuso added that “Rey has a hero complex,” so that’s undoubtedly why he’s drawn to Sharon. Part of Rey wants to take her down, but the part that wants to save her is winning out.

The Young and the Restless spoilers say Rey’s caring side could be a game-changer. It’ll certainly affect this detective’s pursuit of justice. Rey wants the truth about J.T. (Thad Luckinbill), but what happens when he gets it? Will Rey bury it once again for Sharon’s sake? Y&R fans will be anxious to see how Rey navigates the mess.

“Rey’s feelings for Sharon are definitely growing,” Vilasuso said. “He’s a stand-up guy but he’s also only human, and the heart wants what the heart wants.” Naturally, Rey’s wife may have a thing or two to say about this. They’re separated at the moment, so they need to make a firm decision on their future before Rey moves on.

Nick wants dirt to bring Rey down or at least prove he’s got shady motives. Perhaps Nick should seek out Rey’s estranged spouse for a little chat! It might be very enlightening. Regardless, Rey’s falling fast and that could provoke Nick’s wrath in a big way.