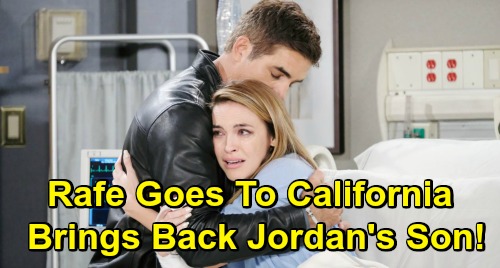 Days of Our Lives (DOOL) spoilers tease that Rafe Hernandez (Galen Gering) is in for a shock. His first surprise will come when Jordan Ridgeway (Chrishell Hartley) reaches out to him. Jordan will ask Rafe to come visit her in Bayview, so her ex will grant her request. Rafe really feels sorry for Jordan after everything she’s been through. It’s not Jordan’s fault she went crazy, so Rafe will just want to help.

DOOL fans can expect a secret to come out during this visit. Days of Our Lives spoilers say Jordan will trust Rafe with some startling information. That’ll be the real shocker. There’s no confirmation yet on what Jordan will reveal, but it looks like it involves a secret baby. Some clues from the week of April 1-5 point in that direction.

Days of Our Lives spoilers state that Rafe will dash off to California. While he’s gone, Hope Hernandez (Kristian Alfonso) will fill Ben Weston (Robert Scott Wilson) in on what they’ve learned. Later, Rafe will come home with startling updates. The show is intentionally keeping things vague, but it sounds like Ben will brought in the loop on the baby and Rafe will bring the kid back with him.

It would’ve been interesting if this had been Rafe’s child, but that can’t be true if it’s an infant. His son or daughter would’ve been much older by now. Days of Our Lives spoilers say Rafe will return on April 4, which may lead to what happens on April 5. That’s when Lani Price (Sal Stowers) will develop an instant bond with a baby named David.

Lani will be drawn to this baby since he shares the same name as her deceased little one. Since the timing adds up and some random baby is appearing in Days spoilers, it makes sense that Rafe will bring home Jordan’s secret son. She obviously can’t take care of him while she’s in Bayview, so David will need someone else to do it.

Perhaps the person Jordan originally left David with couldn’t care for him long-term. Jordan probably got someone to watch him while she went on her mission to protect the people of Salem. She didn’t expect to end up in a mental institution when she was done. Now that Jordan is medicated and thinking somewhat clearly, this is her chance to make sure David’s safe and loved.

Lani may want to take David in, which would leave Eli Grant (Lamon Archey) fearful. He won’t want Lani to go through the pain of parting with another child. Eli may worry that Jordan will get better, reclaim her child and break Lani’s heart.

However, Hope probably won’t be down for raising Jordan’s kid with Rafe. This could lead to some tricky issues between them. As for Ben, he may cautiously bond with David. Ciara Brady (Victoria Konefal) recently mentioned how great Ben is with Chloe Lane’s (Nadia Bjorlin) kids. It’s doubtful Ben would want or could even get custody, but he’ll probably enjoy being an uncle.

Days viewers won’t want to miss the hot drama ahead. We’ll keep you posted as other news comes in. Stick with DOOL and don’t forget to check CDL often for the latest Days of Our Lives spoilers, updates and news.