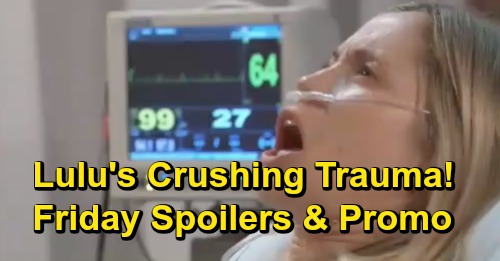 General Hospital (GH) spoilers for Friday, February 1, tease that Ava Jerome (Maura West) will continue to lash out at those around her. Julian Jerome (William deVry) encouraged Ava to keep her anger in check, but he just managed to enrage her even more. Ava’s bitter over Kiki Jerome’s (Hayley Erin) murder, so she won’t be dialing down her fury anytime soon.

On Friday, Ava will approach Olivia Quartermaine (Lisa LoCicero) and demand her assistance with something. Olivia won’t see how she’s supposed to help, but Ava will snap that she should just use this magic of hers to pull it off.

There’s a good chance Olivia will indeed be powerless in this situation, but Ava’s too riled up to think things through. She just knows she wants Kiki’s killer caught and brought to justice.

Ava doesn’t know it yet, but the cops are starting to focus on Franco Baldwin (Roger Howarth). The phone records show Peyton Mills (John Patrick Jordan) tried to get in touch with Franco, so their suspicions are growing. Jordan Ashford (Briana Nicole Henry) and Harrison Chase (Josh Swickard) intend to speak with “Dr. Kevin Collins” aka Ryan Chamberlain (Jon Lindstrom) soon enough.

That should spell big trouble for Franco! Ryan will naturally do everything he can to back up the idea that Franco’s to blame. At GH, Jordan will also fill Curtis Ashford (Donnell Turner) in. As she points out that the PCPD has a new suspect, Laura Webber (Genie Francis) will listen and grow curious. She’ll hope the murderer can be stopped before he hurts someone else.

Lulu Falconeri (Emme Rylan) will certainly have a rough time on Friday. She’ll have some moments of panic as she relives what happened to her. The trauma of her attack was brutal, so Lulu will start screaming and struggling to breathe. She’ll continue to need Laura’s support as she works through this.

Other General Hospital spoilers say Carly Corinthos (Laura Wright) will be nosy as usual. She’ll find out Drew Cain (Billy Miller) was at Dr. Kim Nero’s (Tamara Braun) apartment last night, so she’ll want the details. Of course, Kim won’t offer many. She’s a private person and there isn’t much to tell anyway. Kim certainly has feelings for Drew, but it’s not like they’re getting hot and heavy yet.

Besides, Julian just came clean about his hookup deception. He didn’t sleep with Alexis Davis (Nancy Lee Grahn) after Kim’s New Year’s Eve kiss with Drew. In fact, Julian didn’t sleep with anyone at all. Julian admitted that he thought he was doing the right thing, but now he wants Kim to know the truth. He loves her and she’s made him a better person, so Kim will have to mull over that confession.

Over with Drew, he’ll face some tense moments with the competition. Drew will rant about how bad Julian hurt Kim, but at least Julian’s trying to patch things up. They’ll disagree about what’s best for her, but only Kim can decide what her future should look like.

Back with Ryan, he’ll take his brother’s bait. Dr. Kevin Collins (Jon Lindstrom) pretended to let something slip about a prenup that could offer a huge payday. Ryan will mention it to Alexis, but he’ll probably just get confusion in return. It doesn’t sound like there was a prenup at all, so this will be another red flag to cause problems for Ryan.