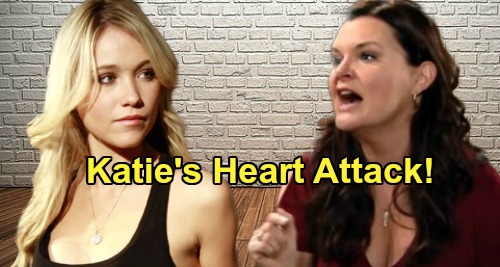 The Bold and the Beautiful (B&B) spoilers tease that Florence “Flo” Fulton (Katrina Bowden) will face another round of berating. After she cuts a deal and walks free, it’ll provoke even more fury from those she’s wronged. Katie Logan (Heather Tom) won’t hesitate to rip into Flo for all the pain she’s caused. She’ll blast Flo for her role in the Logan family’s suffering during the week of September 16-20.

Katie will be appalled when she learns Flo’s off the hook, so her rage will be pretty intense. Of course, we also know a crisis will strike for Katie and Bill Spencer (Don Diamont). They’ll face a nightmare that same week, so it’s possible Katie’s attack on Flo will lead to unanticipated consequences.

B&B fans know Katie had a heart transplant many years ago. Storm Logan (William deVry) killed himself so Katie could survive, so his heart beats within Katie to this day. Flo happens to be Storm’s daughter, so it looks like The Bold and the Beautiful could tie all this together. They could be laying the groundwork for Flo to be forgiven. It makes sense if the family will have to rally around Katie.

The week of September 16-20 will force Bill to choose Katie over work. He’ll get updates on something that causes him to drop what he’s doing and tend to his love. Once Bill realizes Katie needs him, it’ll be a no-brainer. Bill is a true family man now and wants to put the people he loves first. That’s especially true if one of them’s in a life-threatening situation.

Will Katie face heart issues after lashing out at Flo? If Katie has to be rushed to the hospital, you can bet Bill will run to her side. Flo might get some blame at first, but she could find acceptance with the Logans eventually. Katie’s heart serves as Flo’s only connection to her father. That could make the thought of contributing to Katie’s medical crisis even more crushing.

If the rest of the Logan clan sees Flo’s devastation and remorse throughout all this, it could help her make amends. Maybe everyone will agree to a fresh start if Katie will just pull through. Katie’s survival may be all that really matters in the end.