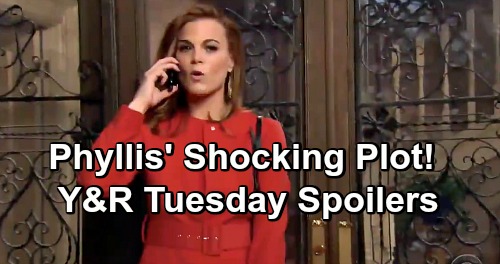 The Young and the Restless (Y&R) spoilers for Tuesday, April 9, tease that Paul Williams (Doug Davidson) will have a change of heart. He was furious when he found out about the trap Rey Rosales (Jordi Vilasuso) set for J.T. Hellstrom (Thad Luckinbill). Rey broke every rule in the book and went behind his boss’ back, so Paul had every right to take away his badge and gun.

At the same time, Rey’s heart was in the right place. He was truly trying to get justice, which should be the goal of anyone in his position. Without Rey’s efforts, the cover-up crew would probably still be locked up right now. Billy Abbott (Jason Thompson) and Nick Newman (Joshua Morrow) needed someone with Rey’s connections to pull this off, so he made the magic happen.

Now that Paul’s had some time to cool off, he’ll begin to see a different side of the drama. Paul considers Nikki Newman (Melody Thomas Scott) a good friend, so he’s certainly glad she’s back home where she belongs. That may be part of why Paul calls Rey in and decides he deserves another chance.

Of course, there’ll be some conditions here. Paul won’t want Rey causing any more chaos for the GCPD! The Young and the Restless spoilers say Paul will deliver an ultimatum. It sounds like Rey will have to play by the rules this time or else he’ll be out for good.

Rey can surely agree to that. He’ll hopefully get Sharon Newman (Sharon Case) back to work there as well. Too bad for Rey that Paul is going to learn something soon that will sink the detective like a stone!

Other Y&R spoilers state that Phyllis Summers (Gina Tognoni) will take steps to protect her daughter. She feels like Kyle Abbott (Michael Mealor) is only going to hurt Summer Abbott (Hunter King), so she’ll do everything in her power to minimize the damage.

Phyllis will hire someone to spy on Kyle and monitor all his activities. She won’t want his new husband doing anything he shouldn’t be doing.

Unfortunately, Kyle will hook up with Lola Rosales (Sasha Calle) later this week and this spy will score some photo evidence. The Young and the Restless spoilers state that Phyllis is cooking up a blackmail scheme. She may make herself a priority over Summer initially, but all of this is set to blow up in Phyllis’ face.

Phyllis will do some scheming against Jack Abbott (Peter Bergman) as well and that just might be her downfall. Jack isn’t in the mood for games after what Ashley Abbott (Eileen Davidson) did and will continue to do through some plotting of her own.