BY Heather Hughes on May 7, 2019 | Comments: Leave Comments
Related : Soap Opera, Spoiler, Television, The Young and the Restless 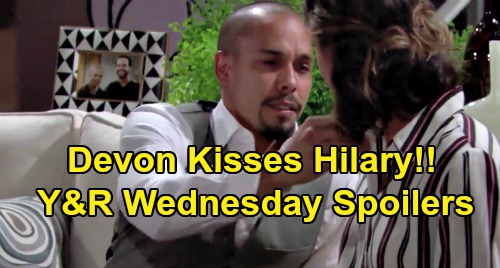 The Young and the Restless (Y&R) spoilers for Wednesday, May 8, tease that Devon Hamilton (Bryton James) will be a bit of a mess. He’ll send some signals that could be considered awfully mixed, so Elena Dawson (Brytni Sarpy) should end up confused. Things will start off on a positive note when Devon gets Elena to talk about her intense guilt.

After Elena admitted her mother died, she clammed up about how it all went down. A curious Devon went to Jett Slade (Gilbert Glenn Brown) for answers, which irked Elena. Fortunately, they’ll put that incident behind them on Wednesday.

Elena will let her walls down and admit she does have a lot of guilt for leaving her mom alone for so long. She’ll feel like if she hadn’t been working so much, maybe she could’ve been there when her mother took that fall. Of course, Devon will point out that none of that was Elena’s fault.

Devon may get Elena to confess that her mother was quite proud of her career path. She would’ve wanted Elena to work hard and make her dreams come true. Speaking of dreams, Devon will have one about Hilary Hamilton (Mishael Morgan) later. Elena will return to find Devon crying on the couch, so she’ll gently wake him and wonder if he’s OK.

The Young and the Restless spoilers say Devon will still see Hilary when he emerges from his slumber. That’s why he’ll plant a kiss on Elena and leave her wondering what’s up. Devon may try to downplay it as something he wanted to do in the moment, but Elena won’t buy it. She’ll sense that Devon is stuck in trauma, so she’ll question whether their romance is appropriate right now.

Other Y&R spoilers say Traci Abbott (Beth Maitland) will take on a new persona. Perhaps she’ll imagine herself as a character in her book along with alternate versions of Cane Ashby (Daniel Goddard) and Lily Ashby (Christel Khalil). Some interesting scenarios will play out as her story continues.

In Las Vegas, Sharon Newman (Sharon Case) will confide in Rey Rosales (Jordi Vilasuso). She’ll share more about her history with Adam Newman (Mark Grossman) and the intense relationship they once had. Rey probably won’t feel like threatened in any way. After all, Adam can’t even remember Sharon yet! However, things could start to shift as time goes on.