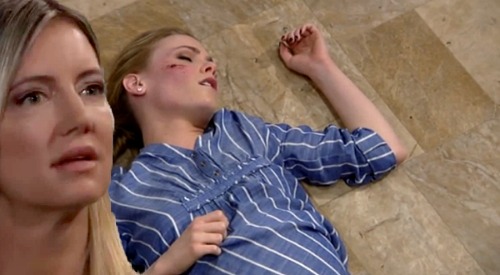 General Hospital (GH) spoilers tease that Nelle Benson Archer (Chloe Lanier) could have a deadly target on her back. GH fans can tell the feud between Nelle and the Corinthos clan is getting worse every day. Carly Corinthos (Laura Wright) hates Nelle with a passion – and so does the rest of her family.

Michael Corinthos (Chad Duell) certainly wishes Nelle were out of the picture, although he doesn’t regret the fact that they made Wiley Quartermaine-Corinthos (Erik and Theo Olson). Still, Michael would most definitely like Nelle as far away from Wiley as possible.

Josslyn Jacks (Eden McCoy) also hates Nelle and wishes she had literally anyone else’s kidney at this point. General Hospital spoilers say Joss will push Jason Morgan (Steve Burton) to do something about Nelle in an upcoming episode. Josslyn will argue that Nelle is evil and hope Jason can stop her, so Jason will wonder what Joss wants him to do.

Carly has delivered death threats to Nelle, and Sonny Corinthos (Maurice Benard) has hinted at it as an option as well. No one would be surprised if the Corinthos family took their mission against Nelle that far. They’re a dark bunch when it comes to people they loathe!

This could actually be a blessing in disguise for Nelle. It seems likely Nelle will survive whatever blow is dealt. There may not be proof that Carly and her posse were behind this fatal plot, but Nina Reeves (Cynthia Watros) might assume they’re to blame.

Since it’s basically a done deal that Nelle is Nina’s biological daughter, this would give them a way to connect. General Hospital viewers will recall how Nina strengthened her bond with Sasha Gilmore (Sofia Mattsson) when she was fighting for her life.

If Nelle faces a life-threatening ordeal of her own, it’ll give Nina the opportunity to do the same thing with her true daughter.

Going back even further than that, Nina was once quite kind to Nelle after she was hospitalized and all alone. Nina visited Nelle after she was mugged on the pier and got choked up over her having no family. Nelle got a promise that Nina would be by her side.

Although Nina and Nelle’s relationship fell apart later, General Hospital laid the groundwork for what would ultimately be a great mother-daughter story. It’s easy to imagine Nina forgiving the sins of the past. Nina would want to focus Nelle’s recovery the deadly incident that’s been hinted at.

Of course, Nina would also want to take down Carly and her crew! If Nina almost loses her bio daughter to this war, you can bet she’ll want Carly and the other Corinthos family members to pay the price.

General Hospital has a goldmine of drama in this storyline, so stay tuned for some exciting twists and turns. We’ll deliver updates as other GH news rolls in.

Do you think Nelle will find herself in deadly danger? Could that bring Nina closer to her soon-to-be-discovered daughter? CDL’s the place to be for hot General Hospital spoilers, news and updates, so don’t forget to pop in regularly.