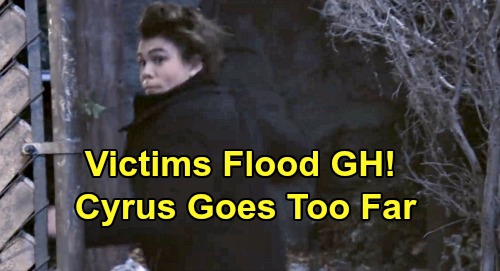 General Hospital (GH) spoilers tease that Cameron Webber (William Lipton) and Trina Robinson (Sydney Mikayla) will remain in grave danger. GH fans know Cameron ordered a car through a ride-share service before the midwinter formal. He gleefully informed Trina that it was an SUV, so they’d be riding in style.

Sadly, things have taken a dark turn thanks to the driver’s deception. One of Cyrus Renault’s (Jeff Kober) goons was behind the wheel, so now they’re hostages. Marcus Taggert (Real Andrews) just arrived on the scene, so he’ll obviously be in danger as well. He’s the real target here, but the other key players involved will be in jeopardy.

Curtis Ashford (Donnell Turner) is waiting just outside and will undoubtedly join the chaos when the time’s right. Since Elizabeth Baldwin (Rebecca Herbst) called Jason Morgan (Steve Burton), you can bet he’ll get in on the action as well. We’ve got a solid team of heroes here with Taggert, Curtis and Jason. They’ll do whatever it takes to make sure Cameron and Trina survive!

Unfortunately, General Hospital spoilers say disaster’s still set to strike. Cameron will somehow manage to get away – perhaps through Taggert’s negotiations or a sudden escape. GH’s weekly preview for February 24-28 shows Cameron running before he ultimately turns around. He’ll seemingly hear a kaboom or gunshots to indicate that this battle’s truly erupted.

Cameron cares about Trina – and many GH viewers are seeing the possibility of a new love story. As Liz pointed out, Cam appeared to be looking at Trina in a new light. Liz always thought they were just friends, but she wasn’t so sure after Cam admired Trina all glammed up for their big night.

Cameron and Josslyn Jacks (Eden McCoy) have some nice chemistry, but so do Cam and Trina. Honestly, Trina’s the one who’s consistently supported Cameron. She was there for Cam throughout Franco Baldwin’s (Roger Howarth) memory-mapping ordeal while Joss mostly ignored him.

Now it may be Cameron’s turn to be there for Trina. Will Cam go back to check on her and get injured in the process? Time will tell, but General Hospital spoilers say the next Cyrus disaster will result in several victims being rushed to GH.

There’s a good chance some of Cyrus’ goons will be hurt or killed, but what about the good guys involved? Taggert, Curtis and Jason will certainly be at risk.

However, we know Jason will corner Curtis for a confrontation later next week, March 2-6. Even if they face some minor injuries, they should be fine. Taggert could be the person in the most peril here. Cyrus and his goons are bad news, so revenge will bring major trouble.

As for the teens, it looks like Trina’s mom will first show up starting March 5. Dr. Portia Robinson (Brook Kerr) won’t appear until a couple days after the victims flood GH, so that could mean Trina will get out of this unscathed.

No matter how things turn out for Cameron, General Hospital spoilers say the crisis will hit too close to home for Laura Webber (Genie Francis). It won’t be long until she flies into a rage and takes charge. If Sonny Corinthos (Maurice Benard) can’t handle Cyrus, Laura will have to handle him herself!