The Bold and the Beautiful Spoilers: Could Thomas & Quinn Land in Bed Together – Misunderstood Schemers and Outcasts Connect? 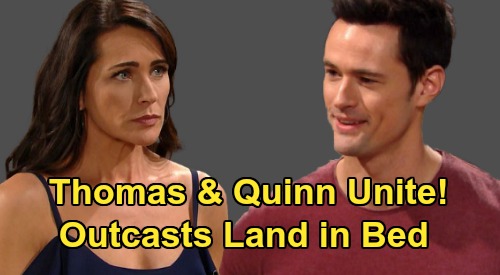 The Bold and the Beautiful (B&B) spoilers tease that Quinn Forrester’s (Rena Sofer) attempt to destroy Brooke Forrester’s (Katherine Kelly Lang) relationship could end up destroying her own. B&B fans know Quinn uploaded the clip of Brooke and Bill Spencer (Don Diamont) making out. That digital frame caused a whole lot of drama, which is only going to rev up thanks to Ridge Forrester (Thorsten Kaye) and Shauna Fulton’s (Denise Richards) latest adventure.

This is one time when what happens in Vegas won’t stay in Vegas! Shauna married Ridge according to Denise Richards’ interview with People TV, so there are going to be complications whether that marriage was legal or not.

Eric Forrester (John McCook) cares about Brooke and doesn’t want to see her get hurt. He’ll hope Brooke and Ridge can work things out, but Quinn’s bound to disagree.

Will Quinn eventually push Eric too far? Is it time for more romantic shakeups? If Ridge puts Brooke behind him, she’ll inevitably lean on Eric for support. That could lead to trouble since Eric and Brooke are exes. The Bold and the Beautiful just loves to let history repeat itself when it comes to romances.

However, B&B isn’t afraid to throw in a new duo occasionally – just like they did when they put Eric and Quinn together. They seemed like an odd couple at the time, but Quinn and Eric have made it work.

Of course, things could change down the road. If Brooke sinks her claws in Eric next, where will that leave Quinn? Could Quinn land in Thomas Forrester’s (Matthew Atkinson) bed?

It’d be fun to see a Thomas and Quinn pairing under the circumstances. They’re both determined schemers who aren’t afraid to fight for what they want. Thomas approached Quinn about plotting against Brooke at one point, but that plan never turned into much of anything. Still, there’s a chance that angle could be revisited.

Then again, maybe Quinn and Thomas could just connect as misunderstood pariahs. Quinn has been attracted to all different types of men and age groups, so it wouldn’t be unreasonable for her to fall for Thomas. It could even be a purely physical thing – just some hookups to ease their pain.

Thomas could use a Hope Logan (Annika Noelle) romantic palate cleanser. Quinn is basically the opposite of Hope, so Thomas might be drawn to her as the anti-Hope in some ways. Could you see Thomas and Quinn getting together? Would you be on board with Quinn and Thomas as a couple or at last two people looking for a good time?