The Young and the Restless Spoilers: Lola Pregnant Just In Time For Kyle Breakup – Summer Poised To Be Stepmom? 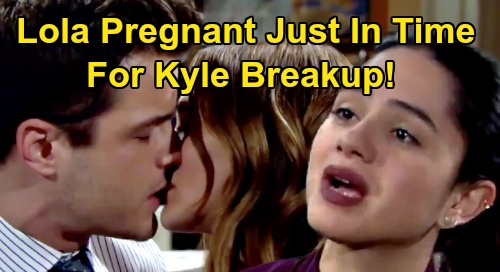 The Young and the Restless spoilers tease that Kyle Abbott (Michael Mealor) and Lola Abbott (Sasha Calle) are in for some tough times ahead. As Y&R viewers know, they’ve had their share of disagreements over Lola’s friendship with Theo Vanderway (Tyler Johnson), which has blossomed over the past several weeks. Of course, Kyle isn’t happy about this and thinks that Theo is playing Lola, and that Lola isn’t discouraging him at all.

Well, the tension between Kyle and Lola over Theo will soon pave the way for Kyle to make a major slip up. According to Y&R spoilers, he will soon embark on a road trip with his ex, Summer Newman (Hunter King), and during that trip, he and Summer will wind up getting a little too close and sharing a passionate kiss. Of course, this development will have been brewing for a while.

As Y&R viewers know, Summer and Kyle have been enjoying a great working relationship. They’re constantly together at the office working long hours and telling each other how wonderful they are and how great they work together.

They share many similarities and honestly it was only a matter of time before something happened.

Well, this all points to some major difficulties for “Kola.” It’s looking more and more like we’ll see Kyle and Lola deal with some serious marital problems in the near future.

Clearly, Lola’s decision to get closer to Theo is something that they need to address as a couple, and if and when Kyle reveals his kiss with Summer to Lola, that’s going to be a major problem for them.

In fact, it’s hard to imagine Kyle and Lola not having a period of estrangement, or even a total breakup, after Kyle’s kiss with Summer comes to light. Lola has been very trusting when it comes to Kyle and Summer working together, and she’s chosen repeatedly to take the high road and not obsess over it.

But once she finds out that Kyle turned to Summer in a moment of weakness, she’ll surely hit the roof.

Of course, given that Y&R likes to go the high-drama route, there might be a big twist coming in the story. What if Lola winds up finding out that she’s pregnant while she and Kyle are estranged by all these problems?

It would be a soapy situation for sure, and it seems to have been foreshadowed by “Kola’s” pregnancy scare a couple of months ago. Y&R viewers will remember that Lola was feeling under the weather and thought that she might be pregnant, and Kyle’s reaction was one of sheer terror.

Kyle tried to hide his reaction, but his mannerisms and facial expressions clearly showed some major stress as he contemplated the possibility that he and Lola might become parents in the near future.

Of course, if Lola were to find out she was pregnant while she and Kyle are having problems, that would cause all sorts of drama. Summer would probably reel from the news, realizing that Kyle would always be tied to Lola and that she could wind up a stepmom if she and Kyle ultimately end up together.

And imagine the situation that would arise when Theo inevitably steps in to help Lola with her pregnancy. Kyle would really hit the roof! We’ll see what happens, but a Lola pregnancy would really shake things up on the show, especially if it comes during a period of strain for Kyle and Lola.

Do you think that Lola will end up pregnant as “Kola” is breaking up? Stay tuned to the CBS soap and don’t forget to check CDL often for the latest Young and the Restless spoilers, updates, and news.