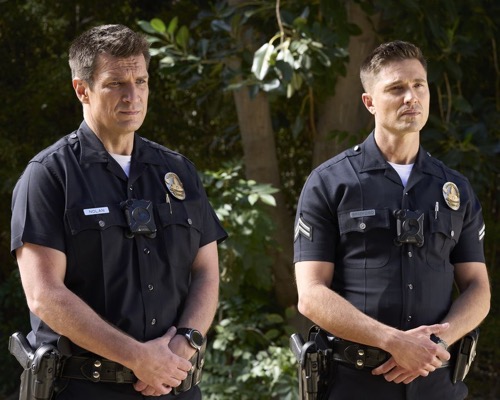 Tonight on ABC their new series The Rookie airs with an all-new Sunday, May 9, 2021, season 3 episode 13 called, “Triple Duty,” and we have your The Rookie recap below. On tonight’s The Rookie season 3 episode 13 as per the ABC synopsis, “Officers Nolan and Bradford hope they can de-escalate a drug war before any innocent lives are lost; Officer Harper hopes she can get Officer Chen ready to go undercover.”

In tonight’s The Rookie episode, Tim and Nolan are riding together when they hear armed weapons. They enter into a cemetery and find one man down. Feet away there are several bodies. Angela is called to the scene. Grey is there. They discuss the gangs involved and their new suspect.

Lucy makes Jackson do their paperwork since she tackled the purp. She is called in to see Grey who tells her about the gang mass casualty. Harper is there. They want her to go undercover long term and without help.

Angela visits a cartel leader, a female by the name of La Fiera, while Nolan and Tim visit her rival to tell him to back down. The son doesn’t believe his dying father handed over control to La Fiera. Meanwhile, she tells Angela that she wants the recording of her wiretap announcing the exchange of power.

Nolan and Tim stake out the land the son, Cesar, is running his operations on while Tim makes calls for Angela’s wedding RSVPs. Angela is approached by the DEA about La Fiera. They want to run the case.

Jackson meets with Nolan’s teacher about police reform while Harper coaches Lucy about undercover work. Jackson is called to a scene to help when he is shocked and angered to find the officer, Doug, who allowed him to be attacked still in uniform.

Lucy and Harper head to a party undercover. Harper introduces her to a big guy in a cooking operation. Lucy sees the girl she has been caring for while she is undercover. She manages to maintain her new character.

Jackson seeks out Grey to tell him about Doug. Grey looks into it. It seems they let him back on the force but with a demotion. Jackson is angry, as he relives the moment he was beaten down in the backyard as Doug watched.

Lucy manages to leave her first undercover gig as a success. Harper tells her what happens next is a surprise.

Jackson brings Nolan’s teacher with him to speak with Grey. She wants to expose Doug. Grey thinks this is bad but Jackson is backing down. Meanwhile, Lucy meets with a drug expert who quizzes her and plans to teach her how to cook as she will pose as a chemist.

Angela meets with La Fiera to hand over the recording as long as she promises not to harm Cesar. Tim and Nolan visit Cesar’s girlfriend. They threaten her about jail. They want to search for her home. Angela calls them. She has a feeling La Fiera is going to kill Cesar’s baby. Just then, a group of men rolls out. They get the girlfriend to hide with the baby while they have a shoot-out throughout the house. When they run out of bullets, Nolan is forced to fight against one man wielding a gun. They manage to get 5 in custody.

Jackson gets his attack video used in a class Doug attends. His fellow officers turn against him after they see it. Lucy is approved to move forward with undercover. Tim and Nolan do their paperwork while Nolan tells him he will be a TO one day.

On her way home, Lucy is abducted. It’s the last test for her undercover mission. She makes it and accepts her new gig.