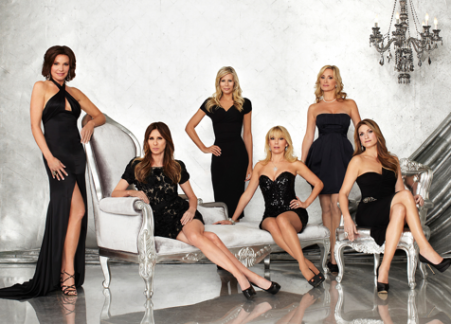 The Real Housewives of New York has been steadily dipping in ratings this season, so it’s not surprising that the network executives have decided to fire every last cast member on the show – except for Ramona Singer.

A source tells Radar Online, “Bravo doesn’t want to cancel the series because New York is the unofficial capital of the United States. The amount of wealth concentrated into such a small area makes it a major draw.”

Auditions to replace the fired cast members are reportedly underway already, which means the executives are moving fast on rebooting the sinking ship. Most of the current cast, including Luann de Lesseps, Heather Thomas, Sonja Morgan, and Carole Radzwill are all getting fired. Ramona, on the other hand, will reportedly get a contract offer to come back to the show, with Aviva Drescher getting a possible guest star offer.

Obviously, the reason they’re keeping Ramona Singer is because she’s the most famous member of the New York cast, and one of the few that’s consistently active in the tabloids. Plus, expect the new cast members to be a lot like Ramona – i.e., over-the-top personalities, ridiculous ego, and a LOT of money.

Honestly, I think that the show needs to fix a lot more than just the cast, and that’s an opinion that’s been shared among Real Housewives fans all over the net. There’s a reason that the freaking New Jersey show is beating the New York version, and that’s because they just have more drama on the air. The New York show just has most of these women talking and talking and talking, whereas the other shows have people fighting, people punching each other, people pulling each other’s hair out, people cheating on each other’s husbands. Contrast that to the NY version, where everything happens off-screen. Yeah, it’s just not going to cut it.