The Young and the Restless Spoilers: Kelly and Stitch’s Mother is Maureen! Victoria Steals Stitch’s Jabot Secrets for Victor 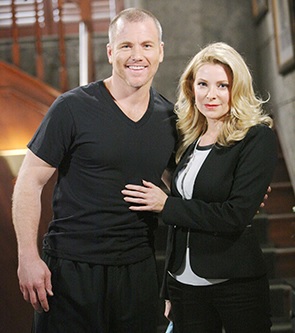 The Young and the Restless spoilers revealed that when Meredith Baxter arrived in Genoa City, she might already have ties to some of the Y&R characters. We already seen Maureen and Nikki/Sherry bonding at the bar and drinking their sorrows away together. But, according to our exclusive CDL The Young and the Restless spoiler source, on Tuesday September 9 Maureen heads to Genoa City and you will never guess who she goes to see! Apparently, Maureen and Nikki Newman have a lot more in common than they ever expected, they might even share a grandchild.

The Young and the Restless spoilers reveal that Maureen is actually Kelly and Stitch’s mother. We know Stitch’s sordid past and that he did time for killing his father, Maureen’s husband (although he claims he is actually innocent), but we never really considered how his mother felt about the entire thing. Does she blame Stitch for his father’s death? Or was she maybe just as rotten a parent as Stitch claims his father was? Only time will tell what Maureen’s intentions are in Genoa City, but it will be interesting to see their family dynamics unravel.

Stitch’s mother’s arrival in Genoa City is just one of Stitch’s many problems these days. Not only does he have Maureen’s surprise visit to deal with, he has Abby Newman breathing down his neck and harassing him, a possibly baby on the way, and now he has to worry about Victoria Newman using him to get her hands on Jabot’s insider secrets. The Young and the Restless spoilers for Tuesday September 9th reveal that Victor Newman instructs his daughter Victoria to use Stitch to find out more information on Jabot’s new secret product.

So, Y&R fans, are you surprised that Maureen is Stitch and Kelly’s mother, or did you see that twist coming a mile away? And, what about Victoria using Stitch to get a hold of Jabot’s inside secrets? You know Stitch will fall for it since he thinks that Victoria is carrying his baby, and he clearly still has feelings for her. Let us know what you think in the comments below and don’t forget to check CDL tomorrow for more The Young and the Restless spoilers.