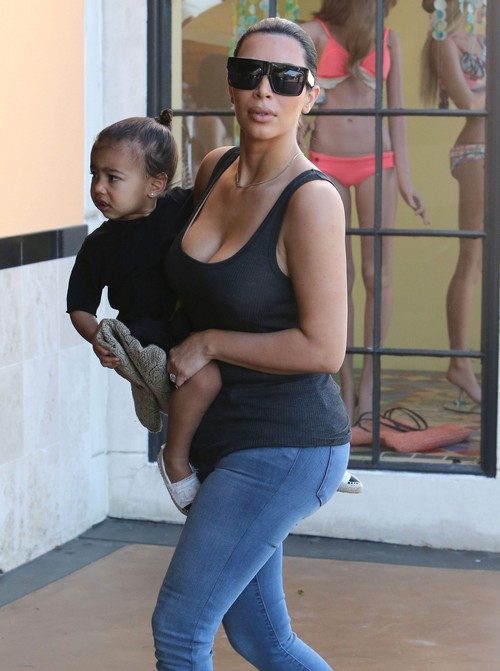 Kim Kardashian and Kanye West were all but ready to sign the divorce papers, until they realized that without Kimye their images would be dead in the water. Now, Kanye West has taken the showmance to an entirely new level and hired a professional photographer to follow himself, Kim, and North West every where they go and take photos of them. Remember the good old days when Kanye was anti-pap forbade the famewhore Kardashian-Jenner clan from allowing North West to be photographed? Well now Kanye has decided that Nori is to be the poster child for pop culture photo ops – one can’t go to the web without seeing fresh pics of the child dragged out for the cameras. Hence the reason for the sudden outpouring of PDA-filled photos of the Kardashian-West family on the Internet.

Kim Kardashian and Kanye’s marriage is as good as over. After fighting for months over her family’s drama, pregnancy and fertility woes, and cheating scandals and love children, there is no salvaging their relationship. But Kim Kardashian is a business woman and she knows that if she divorces Kanye, then she will lose 50% of her market value. Kim and Kanye have branded themselves as one – and without each other they run the risk of quickly fading into obscurity and become irrelevant.

According to insiders, Kanye West was not happy about being trapped in a loveless marriage for publicity, but he is beginning to come around. Whether West will admit it or not, his marriage to the Keeping up with the Kardashians star has boosted his career just as much as it did hers. Now, Kanye is jumping on the showmance bandwagon and hired his family their own paparazzi team – you know for the days that the paparazzi they call to tip off about their whereabouts show up late.

A source close to the Kardashian circle dished to CDL, “Kanye is loving his and Kim’s new business arrangement. At first he was skeptical, but now it’s fun for him – that’s why he was all over her at Paris Fashion Week and way more affectionate than usual. He realizes that together they are a force to be reckoned with, but after a messy divorce they could become has-beens.”

Do you think that Kim and Kanye will be able to keep up their showmance, and fake marriage, much longer? Is a Kimye divorce on the horizon? What do you think of Kanye hiring his own 24/7 photographer? Let us know what you think in the comments below!