‘The Young and the Restless’ (Y&R) Spoilers: Sharon Heads to Fairview – Adam Angry At Ian – Marco Sent Luca After Marissa 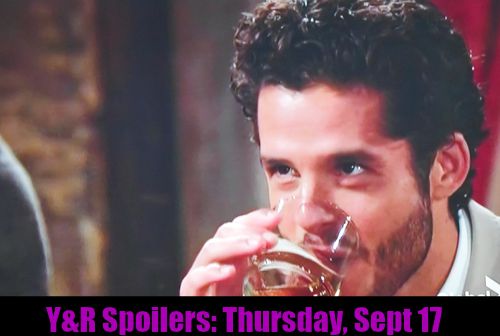 “The Young and the Restless” spoilers for Thursday, September 17, tease that Adam (Justin Hartley) will be concerned about the rapid spike in the sales numbers for Chelsea’s (Melissa Claire Egan) line. Adam will call Ian (Ray Wise) and tell him that they have to talk about the situation. Abby (Melissa Ordway) will show up to do some more bragging about the uptick, but Gabriel (Justin Hartley) won’t be so sure it’s good news. The sudden surge will likely lead to a devastating crash.

Victoria (Amelia Heinle) will fear that the bubble is about to burst, but Nick (Joshua Morrow) will insist they should trust Abby to handle it. Speaking of Nick, he’ll have a heartfelt chat with Sharon (Sharon Case) about her mental health. Sharon will say she thinks she might need some help, but she doesn’t know how Dylan (Steve Burton) would feel about her going to a treatment facility. Later, Sharon will tell Dylan that she feels like she needs to check herself into Fairview right away. Dylan will state that he’ll miss Sharon, but he understands. Sharon’s well-being should be the top priority.

Dylan will also have a conversation with Neil (Kristoff St. John) about the blackmail scheme. Neil will try to deny any involvement at first, but he’ll eventually confess he knew about the hooker and the video. Neil will claim that he confronted Colin (Tristan Rogers) about orchestrating it. According to Neil, Colin just wants revenge. Once they part ways, Neil will try to apologize to Gwen (Nadine Nicole) and she’ll slap him.

Neil will admit he deserved it, but he’ll continue to lie about taking Emma’s (Alice Greczyn) hospital badge. It looks like Neil will stand by his drinking cover story. A short time later, Neil will call his accomplice, who was the pilot of the plane they brought Hilary (Mishael Morgan) home on. Neil will declare that no one can know they were in cahoots.

Other “Young and the Restless” spoilers reveal that a man named Luca (Miles Gaston Villanueva) will be looking for his wife at The Underground. Marisa (Sofia Pernas) will introduce him to Noah (Robert Adamson) and claim she used to know the woman Luca was married to. Marisa will offer the woman’s phone number and she’ll hand over a piece of paper. The note will say to meet Marisa in the park in 20 minutes.

Once they meet up, it will become evident that Marisa is actually the wife Luca is looking for. We’ll learn that Marco (Peter Bergman) sent Luca to Genoa City. Marisa will demand that Luca leave town now, but he’ll suggest that he’s not going anywhere until he gets what he wants. Jack (Peter Bergman) will hear about Luca from Marisa and he’ll fear that Marco could still pose a threat.

Since Marco is in prison, he must be working with a powerful ally. Adam will also tell Jack that the Paragon Project is targeting Newman Enterprises and he can relax since Jabot probably isn’t at risk. Jack will be puzzled since Victor (Eric Braeden) seems positive that both companies are involved.

Phyllis (Gina Tognoni) will grow worried about “Fred” (Ray Wise) and she’ll track down his camper. Fred will tell Phyllis he’s working on a novel. It’s a love story for Fred’s wife. Phyllis will say she’d love to read it, but Fred will reply that he doesn’t want anyone to see it until it’s finished. Phyllis will indicate that she’s hoping for a fantastic ending. Outside the camper, Adam will approach. Phyllis could get suspicious if she finds out Gabriel knows her new pal. Y&R rumors hint that Adam may regret getting tangled up with Ian. Stick with the CBS soap for updates on all their risky business.