The Young and the Restless (Y&R) Spoilers: Is Victor Headed to Prison – Family Blames The Moustache For Marco Connection? 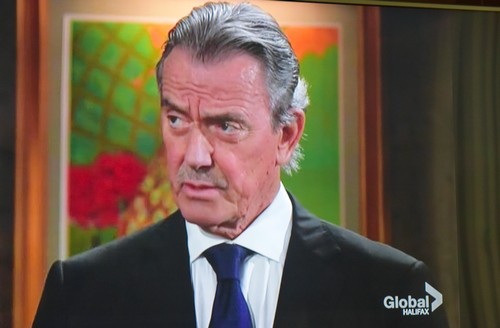 “The Young and the Restless” (Y&R) spoilers about Victor Newman (Eric Braeden) never seem to die down and this time the biggest rumor is that Paul Williams (Doug Davidson) will arrest Victor for the murders of Austin Travers (Matthew Atkinson) and Courtney Sloan (Kelli Goss) or at least being an accessory to these murders. There isn’t much direct evidence against The Moustache, but that has never stopped Paul from arresting someone before.

Over the years Victor has had a hand in more diabolical plots to take down not only Jack Abbott but also his younger brother Billy Abbott (Burgess Jenkins) than can be counted. He has plotted and schemed and gained control of Jabot not once, but twice. But no one has ever been able to make charges of any crime stick for very long. The patriarch of the Newman family is the master of escaping the long arm of the law. Perhaps not this time though. What happens if District Attorney Christine Williams (Lauralee Bell) – who has had it out for the Newman family since her miscarriage – is able to get a verdict of guilty on two murder charges and Victor is sent off to prison?

Not only would the CEO of Newman Enterprises face life in prison, but he would face the wrath of his family. In the past Nikki (Melody Thomas Scott), Victoria (Amelia Heinle), Nick (Joshua Morrow) and Abby (Melissa Ordway) have Victor his transgressions Now Victor’s plotting and vengeance has hurt his grandchildren Noah (Robert Adamson) and Summer (Hunter King).

Victor Newman didn’t murder anyone himself, but the responsibility for Marco’s being in Genoa City and impersonating Jack falls squarely on his shoulders. Time and time again Victor has hurt family and foe alike by bringing people to town in order to hurt them. Most notable would be Patty Williams (Stacy Haiduk), with a brand new face – posing as Dr. Emily Peterson, and Mariah Copeland (Camryn Grimes) who “haunted” Sharon Newman (Sharon Case) as the “ghost” of her deceased daughter Cassie Newman.

Eric Braeden has made it very clear via Twitter that he has no intention of retiring – at least any time soon. If Victor is charged and convicted of the murders of Austin and Courtney, how long will it take for the truth to be revealed? Will his family be able to forgive him when they find out about his involvement in and cover-up of Summer’s husband and Noah’s fiancé murders? How many times can Nikki, Victoria, Nick and Abby be expected to forgive and forget?

What do you think? Will Paul Williams arrest Victor on murder related charges? Will Christine Williams be able to secure a conviction? Is Victor headed for prison? Once the truth comes out can he be forgiven once again? Austin’s and Courtney’s murders may have just been collateral damage in Victor’s plan to take down Jack, but can Summer and Noah ever forgive their grandfather for the part he played in the loss of their loved ones? Sound off in the comments section below!