‘The Young and the Restless’ Spoilers: Avery Fears Joe Will Kill Her – Gabe Learns Flack’s a Fraud – Lily Hides Cheating 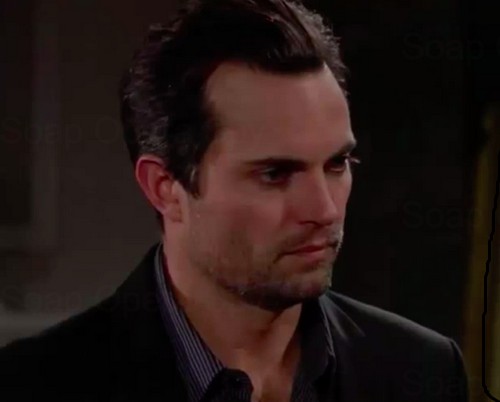 “The Young and the Restless” spoilers for Wednesday, June 24, tease that Joe (Scott Elrod) and Lily (Christel Khalil) will decide to keep the fact that they slept together a secret. Of course, we all know Cane (Daniel Goddard) is bound to find out sooner or later. Meanwhile, Cane will tell Lauren (Tracey E. Bregman) that he’s losing hope. Lauren will say she’s sorry for all the trouble Michael’s (Christian LeBlanc) meddling has caused and she’ll encourage Cane to make things right with Lily.

Avery (Jessica Collins) will urge Paul (Doug Davidson) to arrest Joe, but he’ll reply that there’s no evidence that he was the one in her apartment. Avery will wonder if Joe will kill her before Paul decides to take the threat seriously. Lily will show up and Paul will ask her if she spotted Joe at the athletic club. Lily will say she saw Joe there, but she doesn’t know what time it was.

Once Paul is gone, Lily will admit that she slept with Joe. Avery will be concerned that Joe forced her to have sex, but Lily will indicate that it was consensual. Lily will ask if Avery thinks Joe will keep quiet about their encounter. Avery will say yes, but she’ll urge Lily to steer clear of Joe from now on. Lily will feel she’s being hypocritical after the fuss she raised over Hilary (Mishael Morgan) and Devon’s (Bryton James) affair as well as Cane’s cheating. Lily will also mention that Joe left the room for a while, which means he could’ve been the one in Avery’s apartment.

At the bar, Cane will have a chat with Joe about Lily. Cane will say that Lily wouldn’t be unfaithful to him, but Joe will imply that maybe Cane shouldn’t be so sure about that. Later, Cane and Lily will agree that they want to move forward. Paul will question Joe about his whereabouts earlier and he’ll say that he’ll keep an eye on him.

Other “Young and the Restless” spoilers reveal that Jack’s (Peter Bergman) doppelganger will lash out at Phyllis (Gina Tognoni) for spilling the news that he thinks Victor (Eric Braden) could murder him. Fake Jack will warn Phyllis to stay out of this situation, but Phyllis will refuse. When fake Jack says she should trust him, Phyllis will reply that she doesn’t have a choice. After fake Jack leaves, Phyllis will go through his wallet for any information that might be useful.

Billy (Burgess Jenkins) will demand that Gabriel (Justin Hartley) show some proof that he’s really an Abbott. Gabe will meet up with fake Jack in the park to discuss the impending paternity test. Fake Jack will assure him that he has it covered, but Gabriel will still be worried that the truth might come out. All of this could cause a world of trouble for Gabriel, who is actually Adam. Gabe will be frustrated with fake Jack’s ill-advised plan to take down Victor. Fake Jack will insist that this scheme is his main concern right now. Gabriel will be concerned that fake Jack would throw his family under the bus for the sake of saving his scheme.

Phyllis will talk to Billy and Kyle (Lachlan Buchanan) about the recent updates on Gabriel. Billy will say that his instincts say Gabe isn’t really part of the Abbott clan. Phyllis will comment that fake Jack isn’t acting like a part of the family either at the moment. Billy will declare that he’s going to get to the bottom of things. Later, fake Jack will tell Billy and Kyle that he’s on board with the paternity test idea. After Kyle leaves, fake Jack will take his drinking glass. It looks like fake Jack has a few tricks up his sleeve, but his plan will hit a snag soon enough.

Phyllis and Gabriel will discuss his lies to Chelsea (Melissa Claire Egan) and all the changes to fake Jack’s personality. Gabe will talk to fake Jack and indicate that Phyllis is very suspicious. Gabriel will bring up a delicious meal that Phyllis cooked and ask if fake Jack can remember the name of it. Fake Jack will say no, but he could never forget how great it was. Gabriel will say that it was a lie and he’ll demand to know who fake Jack really is. Y&R rumors hint that Gabe will have to make a deal with fake Jack if he wants to keep his true identity a secret. Stick with the CBS soap to find out if he’ll regret being in cahoots with a dangerous criminal.