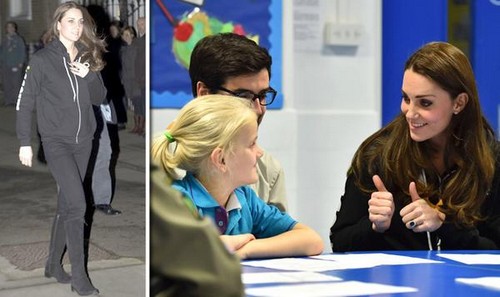 Kate Middleton breaks protocol and rebels against Queen Elizabeth by wearing a hoodie on an official royal engagement to play with Beaver Scouts – is The Duchess of Cambridge angry? Poor, poor Kate Middleton. A month ago, I was the last person feeling pity for her, but does anyone else get the feeling that she’s being worked to the bone right now? She’s pregnant, she just recovered from a serious illness, and she’s been forced on one international trip and multitudes of local appearances since then. And this is while Kate’s baby bump has been getting bigger and bigger, which means she’s had to get creative to prevent the bump from showing.

Kate Middleton’s latest bump-hiding technique is utilizing her hoodie and black pants, which manages to camouflage the baby bump nicely. Kate had to put in an appearance at a Beaver Scout colony tonight, and she was still conspicuous in the black zip-up hoodie, even though it was a relatively informal event. Kate used to volunteer with the Scouts when she and Prince William lived in North Wales, so it wasn’t a random event that she was being forced to attend.

However, we do wonder if Kate’s relationship with Queen Elizabeth has deteriorated in the wake of all these public engagements. Is Kate wearing a hoodie a way of saying ‘f*** you’ to Queen Elizabeth? After all, she’s being forced to dress up and get fancy for almost every public event she makes, no matter how fancy or un-fancy. Perhaps this is Kate finally fighting back – and plus, there’s no chance of wardrobe malfunctions in a hoodie and pants, right?

Even if the hoodie was just for comfort and baby-bump hiding purposes, I still believe that Kate’s relationship with the Queen has become strained. Ostensibly, the Queen is Kate’s boss, but it’s not like Kate can quit being the Duchess of Cambridge? She just has to suck it up, put on a smile, and keep making those appearances. Plus, Christmas is a big time for the royals, and I don’t imagine that things will slow down at all over the next few weeks. Again, poor, poor Kate Middleton.