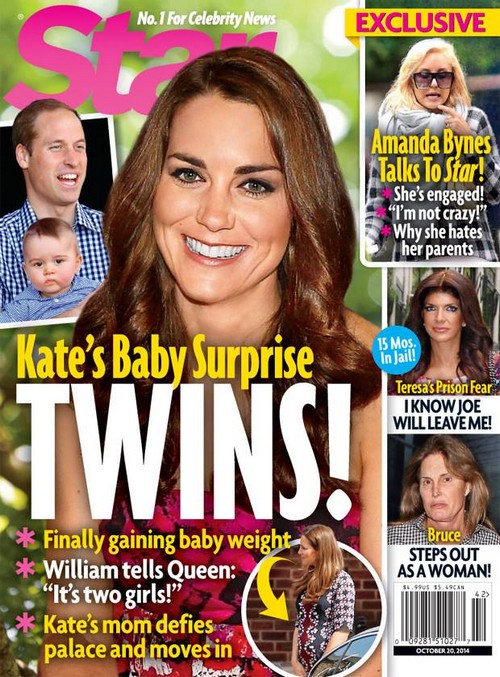 In September the Palace confirmed that Prince William and Kate Middleton are expecting baby number two, and after months of trying to conceive, the Duchess of Cambridge is indeed pregnant again. As soon as the Royal family released the joyous news, everyone began speculating whether the new baby would be a Prince or Princess. Multiple sources have revealed that Will and Kate have their hearts set on a daughter, and have even picked out possible names.

According to the October 20th cover of Star Magazine, Will and Kate are definitely having a girl and possibly even two girls. The cover of the tabloid reveals that Kate Middleton is already gaining baby weight, which happens this early in a pregnancy when the expecting mother is having twins, and Prince William already broke the news of twins to Queen Elizabeth! Star also reveals that Kate Middleton’s mother has defied the Queen’s orders and moved in to the Palace to look over her daughter since her morning sickness is now two times as bad. Of course that is utter nonsense since as CDL reported on October 7 Kate has moved home to stay at her mom’s house in Bucklebury.

The newest edition of Star Magazine also has a piece this week on Amanda Bynes, who spoke exclusively to them in an interview. Despite Bynes recent DUI and sightings of her wandering around the airport talking to herself, Bynes informed Star she is not crazy and actually engaged (perhaps it was her imaginary fiancé she was talking to at the airport). There is also an article on Teresa Giudice, the RHONJ celebrity was just sentenced to 15 months in prison and apparently she is afraid her husband Joe Giudice will leave her while she is in prison. And, it wouldn’t be a new issue of Star without the latest news on Bruce Jenner’s transformation to a woman.

So, do you think Kate Middleton is pregnant with twins this time around, or is it just wishful thinking? Are you excited to watch Round 2 of the Amanda Bynes train wreck or are you dreading it? Will Joe Giudice really cheat on Teresa while she is locked up? Let us know what you think in the comments below!