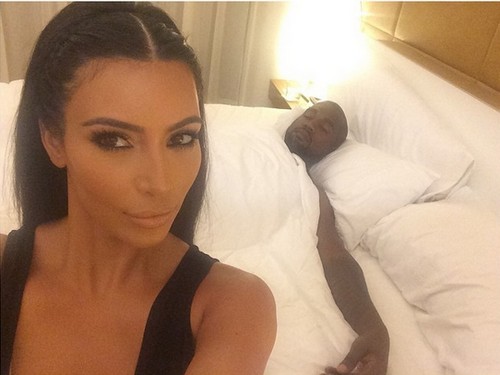 Kanye West and Kim Kardashian love their famewhoring, which makes it more obvious than ever that divorce is possible and Kanye is actually a very neglectful husband. He barely spends time with his wife, and even less with his child, North West. Forget his constant social media Instagramming, selfies and Twittering, maybe he should actually go have quality family time, no?

But Kanye has to rule the world, which means travelling to a different country every month for a concert or a meeting or a party. Sometimes he takes Kim, sometimes he doesn’t. But it’s a remarkably lackadaisical way of living a married life – and one that often leads to divorce. In fact, that’s probably why Kanye wanted to marry Kim in the first place – so that he could do whatever the hell he wanted, and not get one peep of complaint out of Kim.

However, sources are now saying that Kanye is getting increasingly jealous of the attention and the money that Kim is making. For example, the creators of that ridiculous Kim Kardashian mobile have made over $1.6 million in the first five days. Let me repeat: the first five days! That’s more than most apps make in a lifetime, and it cements Kim’s place in pop culture history. Yes, the Kardashians are massive famewhores and there are no legitimate reasons for their fame, but they certainly do pack a punch in the media, don’t they?

Of course, Kanye is now upset and seething with jealousy that Kim’s brand is threatening to become bigger than his. A classic example of a male chauvinist pig, Kanye feels like he is the ‘man’ of the family and should be the breadwinner. Unfortunately for him, it looks like the balance of income and fame is starting to tilt in Kim’s power, and I don’t think Kanye is going to stick around for that to happen. So yes, Kanye and Kim might get divorced before their two-year anniversary, which is actually an accomplishment – most people didn’t think they’d even last until the 1 year mark.