The Young and the Restless Spoilers: Adam Newman Returns To Stop Chelsea and Billy Hooking Up? 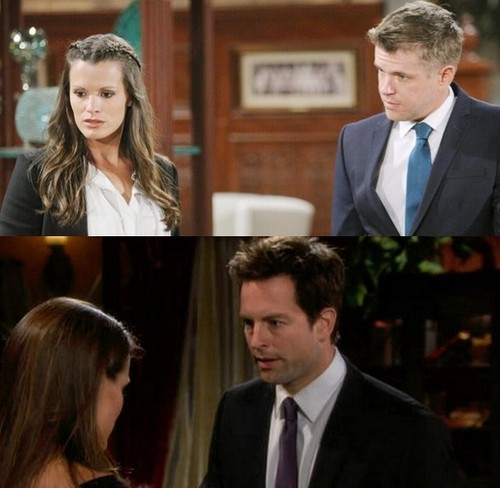 The Young and the Restless fans have noticed an undeniable chemistry developing between Billy Abbott and Chelsea Newman. The pair has been spending a lot of time together since Billy and Victoria split up and Adam Newman passed away. Although Chelsea’s original goal was to help Billy reunite with his estranged pregnant wife, she is undoubtedly growing closer to him in the process.

For those of you who aren’t familiar with the CBS soap opera, Chelsea and Billy actually have a sordid past. Billy met Chelsea at a beach bar and hooked up with her during a drunken night. He returned home and Chelsea actually attempted to press charges against him for rape, despite the fact that the sex was clearly consensual. She showed up on his doorsteps a few months later and revealed she was pregnant, so Billy and Victoria took her in. After a long dramatic nine months, Chelsea gave birth to her and Billy’s son Johnny, and signs all rights over to Victoria and Billy, and then moves in with Adam Newman and started a relationship with him.

So, as you can see, it is very possible for Chelsea and Billy to reignite an old spark, seeing as how they have slept together in the past and do technically share a child together. And, what better time to ignite an old flame than a spontaneous trip to Australia? Billy is determined to speak to Stitch’s ex-wife Jenna and find out what secret he is keeping from Victoria, and it turns out she is currently living in Australia. Y&R spoilers tease that Billy invites Chelsea to Australia with him and sparks will fly between the unlikely pair while they are down under.

Let’s not forget that Chelsea’s not-so-dead husband Adam Newman is currently keeping tabs on her via spy cameras and private investigators, so if Chelsea and Billy do hook up while they are in Australia, Adam Newman will know about it. And, he most likely will be furious, perhaps even furious enough to return to Genoa City?

So Y&R fans, what do you think about Chelsea and Billy taking an impromptu vacation to Australia? Do you think that they will hook up while they are there? If they do discover Stitch’s secret by talking to his ex-wife Jenna, what do you think it is? Share your thoughts and theories in the comments section below and don’t forget to check CDL tomorrow for more The Young and the Restless spoilers.

Soap Opera Spy fans react to the heating up of the relationship between Billy and Chelsea:

Sorry I see no chemistry between Billy and Chelsea!!! Chelsea and Adam… Now that was hot chemistry!!!

Jill and her writers have done some stupid S/L but hooking up Billy and Chelsea has to be the worse one yet.

The only reason im liking this is because they are bringing up Adams name in it so soon we will find out if MM is back or some Yahoo they found should b interesting, actually I hate the two together billy and Chelsea there’s no chemistry there…

the way i remember the story is victor newman paid chelsea to get billy drunk, seduce him & set him up for drug possession when he was in myanmar and billie went to jail – that’s how she got pregnant with johnnie………so if any sparks fly between them now they will be new sparks because they hated each other back then……………..they are really dragging this stitch secret out too long – what ever he did it happened before he was in the military because dylan don’t even know about it – maybe he helped with a mercy killing of a terminally ill patient but at this point i have lost interest……….

Let’s hope that something gets Adam’s hands to grow a body and get back on Y&R – even if it is this awkward coupling between Billy and Chelsea.