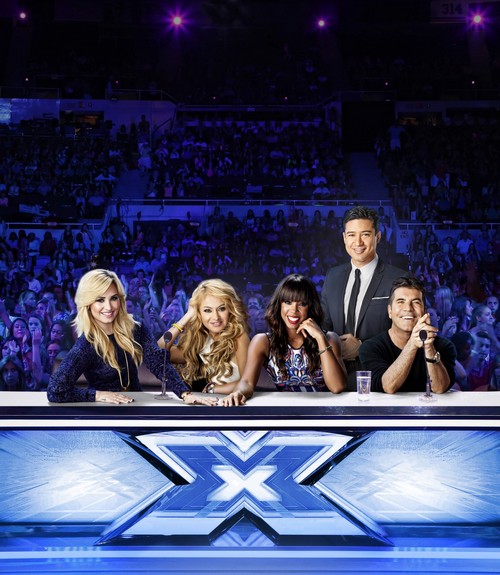 The X Factor is down to the final twelve contestants: Girls – Khaya Cohen, Rion Paige and Ellona Santiago; Boys – Carlos Guevara, Carlito Olivero and Tim Olstad; Over 25s – Jeff Gutt, Lillie McCloud and Rachel Potter; and Groups – Alex & Sierra, Restless Road and Sweet Suspense.  Last night, the final elite twelve took to the stage to sing their hearts out for America’s vote.  Did you watch last night’s performance show?  We did and we recapped it here for you!

Josh Levi – Demi says it was an amazing come back and she is extremely impressed; believing he will have a long career. Kelly says that he comes to life on stage and is so happy he is back; his notes were just great. Simon says he went literally from zero to hero; the difference is just amazing. Paulina says he’s the youngest and was sad having him gone from the last show; she is glad to see him come back with such power. [VIDEO HERE]

Rachel Potter –  Demi says she has come so far and is proud of her, she is so sweet and energetic. Simon says it started off great and felt it was horrible; he did not get it. He believes she made a beautiful song into something insane. Kelly says that she worked so hard and Simon is only jealous of how great she is. [VIDEO HERE]

Carlos Guivera – Kelly says it’s one of her favorite song and honestly thought it was a cool choice for his voice but felt he could have done better or a different song; though she still loves his voice. Simon says that Carlos is kind of lurking around the stage and looking at the floor too much; he believes it was quite good but felt he could be much more. Paulina says that he is giving more and more without thinking about his problems; she believes he did great. [VIDEO HERE]

Restless Road – Demi says that Simon really knows a lot about Motown, she felt that she gave them a great song and they did a good job. Paulina says that they are so special and that the lead vocal was a bit peachy, but the song choice was great and they are cute together. Kelly says they are incredibly talented and was impressed with the tight harmony, but the leads got to be special. Simon says that their charisma and star power is perfect; he believes they will be in the finals. [VIDEO HERE]

Ellona Santiago – Kelly says she is a little power house, she never expected that and gives a lot of respect to her. Simon says that when she came out first he was dreading the performance but felt she nailed the song; she has killer eyes and is very determined. Demi says she could not have been prouder, she has grown so much. [VIDEO HERE]

Jeff Gutt – Paulina says it was so unpredictable and loved the energy he bring to stage; she loved it. Simon says that when he saw the song choice he was nervous about it but felt it was the best vocal of the night and looked effortless; he’s doing very well. Kelly says she is in tears because of how hard it was for him, she is so happy for him and proud. [VIDEO HERE]

Alex and Sierra – Paulina says it looks so natural and loves it. Demi says last week was very boring but this week was sexy and hot. Simon says that they stuck to their guns and believes they have done incredibly well. [VIDEO HERE]

Khaya Cohen – Kelly says she almost threw her pen because she killed that performance; she loved the sass in her performance. Simon says that shutting his eyes it was like listening to Amy Winehouse and loved the staging and it was such a great performance; her vocals were fantastic. Demi is so proud of her and loved how she is coming out of her shell and felt her voice could be the best in the competition. [VIDEO HERE]

Carlito Olivera –  Kelly says she loves how he pours all of himself into the song; she felt him get a little peachy but liked it none the less. Simon says it reminded him of a dream he had last night; it wasn’t as good as last week and felt it was over theatrical and that he is better than that. Paulina says that he did good but believes that Simon was kind of right. [VIDEO HERE]

Lillie McCloud – Demi says her voice is incredible and her stage presence is just amazing; but she felt the song still felt a little out dated. Simon says that last week he said she was out dated; but this is one of his favorite songs and once again has to be honest with saying it was absolutely fantastic. Simon says it’s so easy to take for granted how good she is, he still thinks there is more to come from her. Paulina says she is amazing. [VIDEO HERE]

Sweet Suspense – Paulina says they have it all; the music, wardrobe and the vocals. Demi is so impressed  and feels like they are absolute stars, she thinks they killed it. Kelly says that she honestly doesn’t feel like a girl group hasn’t been in the market for a long time and thinks they are sensational. Simon says they progress so much in the two weeks and that there is something special about them. [VIDEO HERE]

Rion Page – Kelly says that she looks very radiant tonight, she loves that song and isn’t sure if she liked the rendition of it but still loves her voice. Simon says that she kind of thought she lost her country roots last week, he feels she pulled it off and it is one of his favorite song of all time. Demi says that she struggled a lot to be herself when singing and felt like she pulled it off tonight; she is really proud of her. [VIDEO HERE]

Tim Olstad – Demi says that to her he has an incredible voice but the song sounded very karaoke but doesn’t see him moving on; she struggles to find where he fits but he is talented. Kelly says that he is an incredible singer, but she has to be honest and because of how great he is she is expecting way more from him. Simon says that he really liked it, he knows who he is now; he is Donny Osmond. Simon believes what’s important is what kind of artist he wants to be, he believes Josh Groban is the route to go with him; he is glad he took the critique like a man. Paulina says she doesn’t agree with the Demi and that he is the choice of the people.

Whose performance did you enjoy most? Who do you think will be eliminated tomorrow? Who is your favorite? Let us know your thoughts in the comments below and don’t forget to vote in our official Celeb Dirty Laundry poll below! Remember also to bookmark CDL and check back here for our live The X Factor recaps, reviews, news, and spoilers!